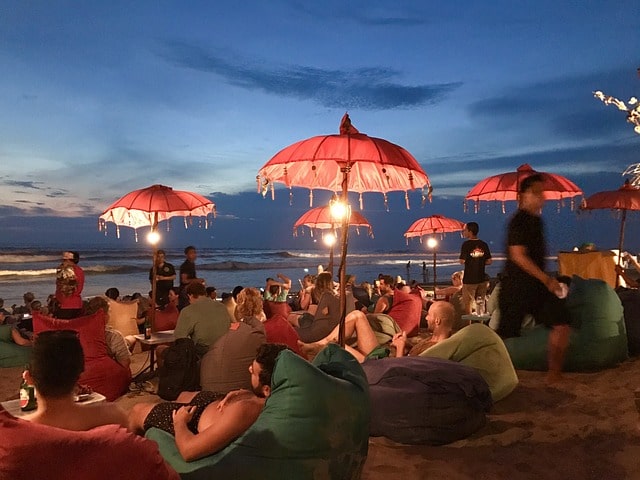 Comprehensive Guide to Backpacking in Southeast Asia on a Shoestring Budget

There has been tremendous economic development in the Southeast in recent years, and by mid-century, more rich people will live there than in America and Europe combined.  What has this got to do with backpacking the Southeast Asia route, I hear you ask?  Because, what I am essentially saying is this: Asia can be as cheap as you want it to be. It can also be very expensive. And generally, because it is getting richer, it is getting more expensive, year on year.  There is no better time to explore Southeast Asia than at this time.  So take advantage of our advice and follow our comprehensive Southeast Asia Backpacking Guide to plan your trip.

I bit of perspective is in order for backpacking the Southeast Asia route. In his book ‘Factfulness’, Hans Rosling argues for a redefinition of the way we look at poverty in the world. He outlined four levels of economic development; at the top of which is Level 4. If you are reading this on a personal computer, and if you own a car, then you are probably on this level. At the bottom is Level 1 — or, the extreme poverty that we are accustomed to seeing on charity advertisements on television.

Southeast Asia is somewhere between Level 2 and 3, but with a rapidly growing Level 4 middle-class that are just as wealthy, if not wealthier, as many people in the West.

When I first set off to Southeast Asia with a copy of the Lonely Planet book, I was shocked to find that even at low season (I visited March to August) the prices marked in the book were cheaper than in reality. The prices in the book are always quoted at high-season. Yet even with the newest edition, still hot off the shelves, the prices had increased substantially.

The prices that are the quickest to go up are hotel, transportation, and tour prices — basically anything that feeds off the tourism. You cannot really avoid these price-hikes, unless you plan on doing fewer tour and more finding your own way about (which I would not recommend).

My key takeaway would be this: always expect the prices to be about a third higher than what you read online or in a book — even if what you’re reading is pretty up to date.

Southeast Asia has it all. There are luxury five-star hotels with astronomical prices, restaurants that will make you feel (and pay) like right at home. But there is an invaluable bonus for backpackers: street food. 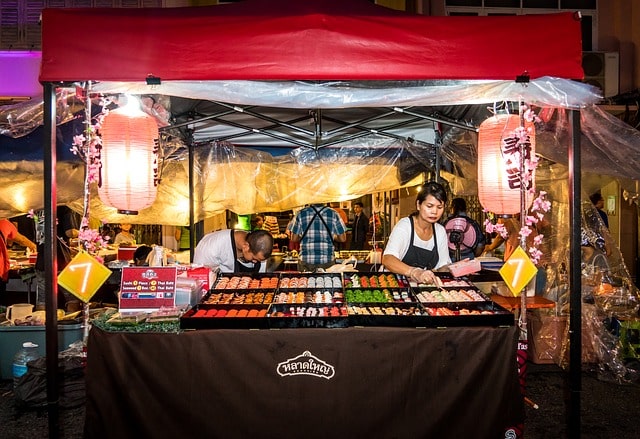 Street food is abundant pretty much everywhere. Thai people don’t tend to have kitchens, and so eat almost everything from a street vendor. My favourite food was in Vietnam, though. You can usually get a filling plate with meat, plenty of vegetables, and rice for like $2. After that, you can stock up on fruit for next to nothing. There is also something satisfying about watching street food cooking and being prepared right in front of the eyes.

Be aware though, some street food can make you ill, though. But you will know the ones to avoid just by glancing at them.  It’s safest to eat hot cooked food and have a good supply of Pepto in your backpack!

My key takeaway would be this: If there’s one way to keep your expenses down, street food would be it.

Whenever you travel anywhere, which is usually by bus but occasionally by boat, there are hordes of tuk-tuk drivers waiting to greet you — and to rip you off. A tuk-tuk is a bit like a taxi and a golf cart put together, and they can be a fun way of getting about short distances.

But the drivers will always ‘see you coming’ and vastly inflate their prices. They are banking on you feeling tired and lost, but you can’t walk five feet without seeing a tuk-tuk somewhere. Leave the bus depot behind. You will find a tuk-tuk around the corner with normal fare charges.

My key takeaway would be this: Never run to the first tuk-tuk driver at a bus/boat/train station. They will always try to rip you off.

At home, the weekend is too short and the five-day week is too much of a slog. Here, though, the weekend comes round too fast and is terribly inconvenient. On weekends everything increases in price. That means hotels, transport; everything when you’re in a big city with lots of locals.

In tourist areas, the prices always tend to be high, but the locals get stung by weekend inflation, too. So you will want to keep an eye on the calendar to make sure you aren’t planning on a hotel break in the middle of Bangkok on a Saturday — or worse, on a public holiday.

My key takeaway would be this: Weekends are a headache for backpackers when it comes to inflated travel and hotel prices. Try to stay away from the cities, or go on an overnight tour to save money.

Things change all the time, and there’s no better information than the real-time word of mouth from other travellers. Plenty of hostels and hotels have lounges where backpackers meet to swap and tell stories. Here you can ask about to better inform your trip.

Was that tour really worth it? Should I take the sleeper train or night bus? Where’s a great but cheap place to eat? All will help you spend your money that bit wiser.

My key takeaway would be this: Ask questions of those around you for the latest, real-time advice on how best to spend your time and money out there.

I found this out by accident. When something (inevitably) went wrong with my bank, which left me without a place to stay in Cambodia because everyone wanted money upfront for a room, I had to go and ring the bank.

I ended up calling from Skype and it costs next to nothing to make an international call that lasted ages. The best bit: they thought I was calling from a regular mobile line, and refunded me hundreds of dollars for a call that cost me a few cents!

My key takeaway would be this: There will be times when you will have to call home and not just to speak with family. If you can’t call on WhatsApp and leech off of a reliable Wi-Fi connection, then try Skype credits — especially for institutions like banks.

Travel tip #7: Bring your own sunblock

Sunblock is hard to find in Southeast Asia and extortionately priced, even more expensive than at home. Most of it is filled with “whitener” (the opposite of a tanning agent, because the trend for Southeast Asians is to look as white as possible) too.

My key takeaway would be this: Pack a few bottles and bring them with you. Most of the time you will only be covering your arms and face, so they should last a while.

I once tipped a young boy a 50 riel note in Cambodia, only for him to look at it in disgust and walk away. I had just arrived and could not understand to the offense — till I Googled the exchange rate and found it was the equivalent of 0.012 of a dollar.

You can use American dollars in Cambodia and in some other Southeast Asian countries, but a lot of the time you will end up with mental gymnastics over how much notes with ‘10,000’ on them are really worth. This quickly gets confusing if you are moving from country to country in a matter of weeks.

Currency-converting apps save a lot of effort and allow you to gauge what it is you are spending and when.

My key takeaway would be this: Don’t try to tip 0.012 of a dollar. Even beggars will be offended. Use currency-converting apps so you know where you stand. 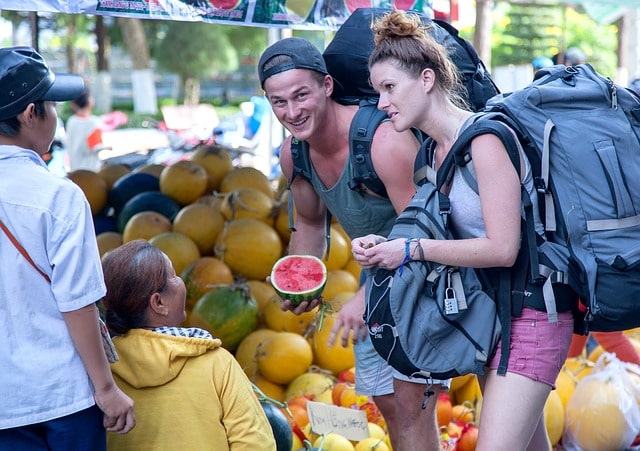 There are tons of backpackers out to meet people and make friends of a lifetime. In Vang Vieng in Laos (an old town that used to be an air force base we used to bomb the Viet Cong), I met up with a group and we all put together for a hot air balloon ride. There were stunning views overlooking the flat river lands between the mountains — and they would have been completely unaffordable and off-limits without the group effort.

My key takeaway would be this: If you find yourself with a great group of friends, consider chipping in for private tours, private modes of transport, and other experiences that you could never afford on your own.

Travel tip #10: Keep some money to one side for… special occasions

There will come a few times when backpacking on the Southeast Asia route where you feel tired. Backpacking is not a holiday — it’s much better than that — it’s the experience of a lifetime. But at some points, you will need a mini-escape from it all.

So if you’re sick of staying in hostels or riding the budget buses, you might want to dip into your budget for a hotel with a private bathroom. Or a bus with extra legroom.

This moment arrived for me as I made it to Vientiane in Laos. My last day was marred by the horrible thought of the “Bus From Hell” (Google it, see what I mean).

The Bus From Hell is the backpacker route that takes you from the south of Laos to the north of Vietnam. Transport links in Laos are poor, and the journey can take anywhere from 8 to 36 hours to reach Hanoi, the “northern capital”. The Bus is often over packed, and there are stories of backpackers being forced to lie on top of one another at the rear. There are also stories of anti-Western racism, a lack of air conditioning and no toilet breaks.

None of this took my fancy, so I booked a plane to Hanoi instead. It took less than two hours and there was a pleasant meal to boot. It cost over $250 dollars, though. Flights are not cheap.

My key takeaway would be this: This is not a budget tip, it’s more of a wellness tip. Sometimes backpacking can be a bit too rough and tumble. If you have the money, treat yourself from time to time.

*********************************
About The Author:  Neil Wright is a keen traveller and writer for We Buy Any Motorcaravan. In the past five years, he has backpacked around much of Southeast Asia and now lives for new adventures out on the road. This year, he finally got to drive across Canada and the United States in an RV, fulfilling a lifelong ambition. 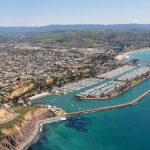 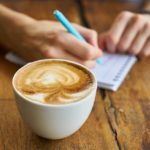