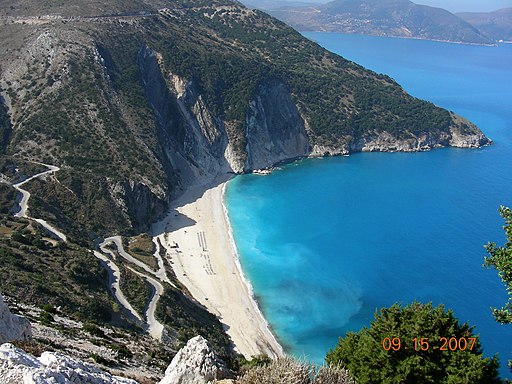 Here’s an overview of my experience visiting the beautiful beachs of Kefalonia, Greece.

If you do a quick Wikipedia check on Kefalonia, you will discover that it is the largest island in the Ionian sea, but it is so much more than just a big island. It’s a truly beautiful place with a wealth of dreamy beaches and destinations worth exploring. If you’ve ever been to Greece and visited any of the Ionian islands, you’ll know that the turquoise color of the sea is simply enchanting.

Arrival and Accomodation
I travelled to Kefalonia with my boyfriend and a couple of friends in 2017. We were situated in a small town called Lassi, about 20 minutes on foot from the island capital of Argostoli. It’s a peaceful little place ideally suited for anyone looking to relax and just unwind on the beautiful beaches during the day. There are many taverns and restaurants along the main road, but if you’re looking for wild nights out and partying, I would suggest Skala on the south, as a better alternative for that.

Lassi was a great choice for us, as it’s located really close to the airport. 15 minutes after entering the bus shuttle from the airport, we arrived to our villa. Pretty neat, if you ask me. Needles to say, we were on the beach literally less than an hour after exiting the airport. Depending on where you decide to stay, you will travel no more than an hour/hour and a half from the airport to your accommodation.

For the first couple of days, we were mostly exploring the beaches of Lassi. There are quite a lot of beaches for such a small town, but we spent most of our time in a semi-wild beach called Kalamia. There were some sunbeds and umbrellas set up on the beach and they were completely free to use, but there was no bar or restaurant of any kind so you had to come prepared with some supplies if you wanted to stay there the whole day.

Unfortunately, for those who prefer isolation, the beach is no longer semi-wild, as a small beach bar has been constructed in the meantime. Kalamia is a great place to relax and enjoy the peace, especially if you’re a fan of snorkelling. The water is clear and there’s lots of marine life to explore.

There are at least 10 beaches in Lassi and we checked out most of them. There’s a little bit of something for everyone, from the calm and peaceful Kalamia to loud and rocking Costa Costa beach club at the Makris Gialos beach. Almost all the beaches are sandy and easily accessible from the main road and there are several hotels which have their own beaches as well, like Mediteranee and Thalassa Boutique Hotel.

Getting Around The Island
Depending on your ambitions to explore, you can either use public transportation or rent a scooter or a car, though the latter option surely is better if it is something you can afford. The prices were reasonable, so we rented a car and set out to see all the most famous destinations on the island.

After checking out Argostoli, famously known for its giant turtles who surface in the marina around noon to get fed by local fishermen, we decided to start our journey to the west of the island.

First up on our itinerary was the Xi Beach, or the beach of golden sand, as it’s known. We took a ferry from Argostoli and arrived there in about 30 minutes from Lassi. The beach is famous for its dark orange sand and clay rocks surrounding it, which are said to have a therapeutic effect on the skin. Needles to say, we tried covering ourselves in the clay and it felt really nice afterwards, indeed! A bit of a silky smooth feeling.

Moving on, we stopped at the Vatsa beach, which felt like a small, secluded part of a paradise. There were very few people on the beach, and it felt almost like we had it all for ourselves. A must see for those who like to avoid the crowds.

Next up, we stopped at the Petani beach. This is a large beach, with a couple of beach bars and a pebbly approach to the water, somewhat of a rarity on Kefalonia as most of the beaches are made up of sand. The waves were pretty big that day and we enjoyed bouncing around in the shallow waters. That concluded our first day of exploring.

Day Two – Myrtos, Assos, Fiskardo
On the second day of driving, we headed straight to Myrtos from Lassi. Without a doubt, one of the most breathtaking views you can get is on the way down to Myrtos beach. The approach is quite lengthy, as the beach is hidden behind a cascade of mountains. After some zig-zagging, you arrive at a perfect photo point, where you can see the whole beach from end to end. One of the best scenes on the whole island, for sure. The beach itself is mostly made up of small pebbles and some sand, the water is crystal clean and the colour is simply amazing. Possibly one of the most beautiful places I’ve ever been to.

After soaking up the sun at Myrtos, we continued on to the small town of Assos, not too far away towards the north. The road to Assos was an experience in itself, as you drive along the beautiful coast and let your thoughts wander away with the beauty that surrounds you. So many photo-ops along the way, as well. Assos is a beautiful historic town, with a castle overlooking it from the nearby hills. We took a coffee break and enjoyed the relaxed atmosphere of the town.

Next up was Fiskardo, a small town, almost at the northernmost part of the island. Similar to Assos in size, but with a much more cosmopolitan, exclusive vibe to it. It’s a very popular destination if you own a luxury yacht, and from what we’ve heard, celebrities like it as well. Makes sense, right? Jokes aside, it’s a very nice place along the coast and well worth visiting.

Wikimedia Commons by By Jean Housen

We concluded our last day of exploring on the east coast. We visited the Melissani Lake Cave, which is a subterranean lake accompanied with a small cave. The water in the lake was very cold and refreshing, crystal clear, as you might expect from an underground water source.

Wikimedia Commons by By Matt Sims

The best time to visit is around noon when the sun shines directly above you. This creates some stunning imagery, when you combine the contrast of the brightness shining directly at the water and a dark cave surrounding it. You are taken on a small boat and guided around while a tour guide explains the history of the place. It’s a short tour but surely worth it, if you like unique things like underwater lakes.

After the lake, we took a brief walk through Sami, another town with distinct Greek charm. However, we were looking forward to Antisamos beach very much, so we didn’t spend much time in Sami.

Antisamos is very similar to Myrtos but much smaller and a more organized beach, with several beach bars lined up along the coast. We spent most of the day just swimming, relaxing, sipping some cocktails and enjoying the beautiful view from the beach. What more could you ask for?

If you’re on the fence about going to Kefalonia – just go for it.  You will have a great time regardless where you choose to stay. The whole island is beautiful, there are more beaches and other places of interest than you can realistically visit during your stay, so there will be no shortage of interesting things to see. The sea is pristinely clean and its color will mesmerize you. Everywhere we went, we had a great time. I’m sure you would too. Good luck and safe travels! 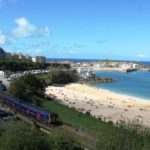 Best Ways to Travel With a UK Rail Pass 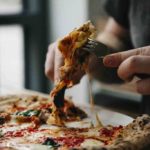 A Local’s Guide to Eating Out in Manchester, England