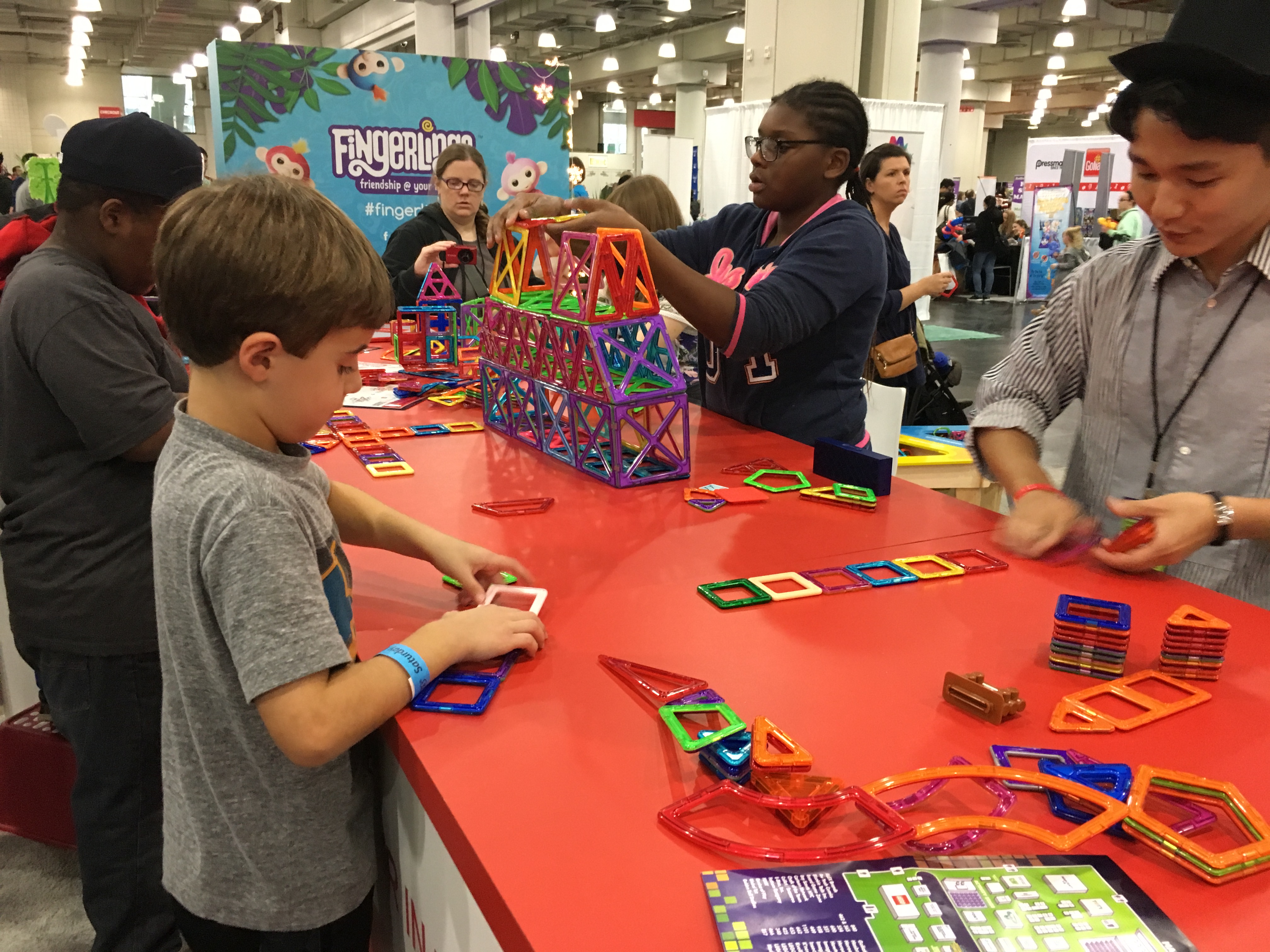 Hi-Di-Ho It’s Off To Play Fair NYC We Go!

After a hop, skip and jump on the LIRR we arrived at the Jacob Javits Center to attend Play Fair NY on November 4, 2017.  There was a time when folks flocked to New York’s famous toy store each fall to learn about new toy trends, but today, Play Fair is the top spot to experience what’s new in the world of toys, play and entertainment.

The first Play Fair began in 2016 featuring hands-on experiences for people of all ages to celebrate the world of play and entertainment. All the top brand toy companies like LEGO, K’Nex, Leap Frog, Nerf, Toys R Us and much more participate in Play Fair. They feature the latest and greatest toys for your kids to experience first hand.  Play Fair is open to the public and has morning and afternoon sessions available. Tickets start at $30 per person. There are VIP packages and family packs available as well.  Come along as we explore all that’s new in the world of toys.

We began our adventure at the Nerf Battle Tent. While my son and husband battled it out with the latest Nerf guns. I went to scope out where we would play next. Of course, my son had his own plan, which was us chasing him to LEGO. Lego had more LEGO’s than a kid could play with. They had laid out the largest pile of LEGO’s for kids to build, run through and jump into. It was something I had never seen before. Adults and kids rolling around in LEGO’s like they were at the beach in the sand.

Maddie Rae’s Slime Glue Stage had a booth and of course, kids were lined up to make slime. They were also trying to reach Guinness World Book of records for the largest amount of slime created in one place.

We visited Spin Master and played with Bunchems, Kinetic Sand, and Soggy Doggy Board Game.  Magformers had a large booth with their new products on the market, including the toy of the year, My First 3-D set. My son was creating all kinds of cool shapes with the Megformers.  The company had one of their best idea creators working with my son, teaching him tricks, yes, I said tricks with the Megformers.  My son was amazed and could not wait to take his newly purchased set home to practice his tricks.  These are much stronger and made with more innovative materials than the Magnatiles.   I would highly recommend purchasing a set of these, they provide hours of entertainment and creativity. They really allowed for the great use of a child’s imagination.

We discovered Meeper Bots, which I must say, I was completely amazed by.  These Bots come with options for colors of the wheels, but the basic design is the same. A grey blank slate on wheels, but the technology and creative thinking that goes along with them will blow your mind.  These little cars are linked to a free app that kids can drive the little cars around, once they take all those LEGO’s they have, and build their own car designs.  The booth had a little area for the kids to race and drive them around once they were built.  This is a small four-person company in Wisconsin that is growing, but I see big potential for them.  I would recommend getting one of these for your kids. I already ordered mine.

There was a Minecraft truck for Minecraft enthusiasts to play the game. K’nex had a large booth displaying all of their cool building structures, as well as Ben 10 showcasing new shows. Playdough set up a great area for kids to use their imagination to create whatever came to mind.  LeapFrog-V-Tech displayed a great of their toys and the latest toys that are hitting the shelves which include, interactive smartphones and watches for kids. Some of the new items are LeapFrog Epic Academy Edition, LeapPad Ulitmate, and LeapStart. V-tech featured it’s Smartwatch and KidiBuzz hand-held smart device.  With the holiday’s right around the corner. These are great gift ideas.

As always, Play Fair is such a fun event for kids and their parents.  With lots of opportunities to meet and greet their favorite characters and try out old and new toys they love, it makes a fun event for the whole family.  Watch for an opportunity to go next year, I would recommend it.

About the Author:  Alisha Rappaport is a marketing and development consultant and is a mommy blogger for Wicked Good Travel Tips. She enjoys taking her son on new adventures and sharing her experiences with our readers.

How Tech Has Improved International Travel

6 Quick Tips For Getting The Best Exchange Rates