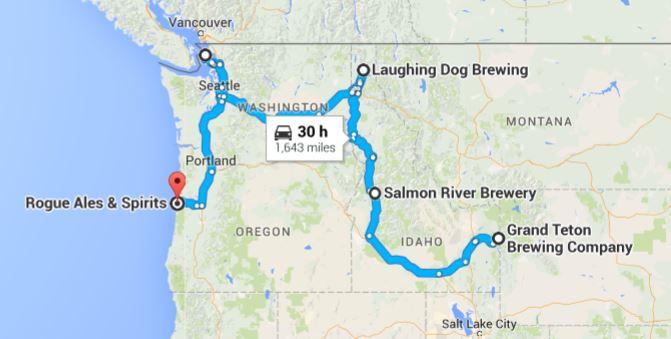 A brew and a view: Northwest Brew Tour

America’s Northwest is a gorgeous area for travel, with rugged mountains, clear running rivers, high desert, and ocean access. This area also has also become known for some great breweries. These breweries boast regional ingredients and deliciously crafted beers of all varieties. So while you’re taking in the wonders of the Northwest, why not check out its nature sites and breweries at the same time?

Here’s a guide to an epic tour of breweries and nature sites you won’t soon forget.

Start at the southeastern corner of Idaho. Grand Teton Brewing is located in the town of Victor at the base of the Teton Range of the Rocky Mountains. This is the perfect place to warm up after a day of skiing. The brewery uses glacial runoff naturally filtered over thousands of years by Teton limestone and granite. Its Sweetgrass American PA won gold in the Great American Beer Fest. At the brewpub you can enjoy a huge bison burger with your brew.

A plethora of ski resorts are nearby, including Jackson Hole and Grand Targhee, which Forbes listed as #1 and #8 on the Top 10 North American Ski Resorts 2016. Planning a summer trip? There’s hiking and mountain-biking, too.

In terms of Idaho breweries, it’s tough to beat Grand Teton’s quality. But in terms of scenery, the trip to Salmon River Brewing is spectacular. You’ll head past the Bruneau Sand Dunes and through the capitol city of Boise (which has a bunch of breweries you could visit). Then you’ll follow the winding Payette River to McCall, where Salmon River Brewing sits overlooking picturesque Payette Lake. The brewery has a great menu with a Black-N-Blue Elk Burger that goes perfectly with the hoppy P.F.D. Pale Ale. P.F.D. won the North American Beer Award silver medal.

Nearby, you can go swimming or boating in the crystalline lake. If it’s a winter trip, ski at the powdery Brundage Mountain Resort. Or if it’s hot springs you’re looking for, try Gold Fork, with its mineral-rich pools at a variety of temperatures.

From McCall, keep going north to Ponderay, which sits in the heart of the Selkirk Mountains, next to one of the biggest lakes in the United States, Lake Pend Oreille. Laughing Dog has 10 award-winning beers, including a distinct taste of Idaho, Huckleberry Cream Ale. They flavor it with real huckleberries at just the right time during the brewing process, so it’s not too fruity. If you like more hoppy beers, try the Laughing Dog IPA, which took bronze in the Great American Beer Fest. Laughing Dog gets its name from the family dog, Ben, which explains the dog-friendly taproom.

Lake Pend Oreille is something to see. At 43 miles long, it’s the fifth deepest lake in the nation at 1,158 feet deep. Idaho is famous for fishing and wilderness, and this lake is exemplary in that respect. If you don’t like to fish, you can go sailing, take a paddle tour, or explore one of the three major mountain ranges surrounding the lake.

Head west to the Washington coast and take a Washington State Ferry from Anacortes to Orcas Island. This is a trip fully worth it. You’ll feel like a mariner threading your way out through Bellingham Bay to an island destination where fresh ale awaits. This intimate brewery has many special touches. They make their own tap handles from real tree branches, which you can buy. In the beer garden you can smell fresh boiling wort inside, or you can sit outside and soak in the bay air. It’s a cozy spot with seven small-batch beers on tap, including a jalapeno-infused blonde ale and their signature Old Madrona Imperial Red Ale, which is in high demand.

While you’re there check out Moran State Park, the largest public recreation area on the San Juan Islands. There are 38 miles of hiking trails, 11 miles of biking trails, and 6 miles of horseback riding trails, but if you’ve spent a lot of time at the brewery, you might just want to chill out lakeside at Mountain Lake or Cascade Lake.

Go south down the coast until you find yourself in Newport, Oregon, the headquarters of Rogue Brewing. This brewery has blown up and earned numerous awards for their sometimes-experimental, groundbreaking beers. While you enjoy the balmy ocean-side town of Newport, you have multiple options for tasting what Rogue has to offer.

At Brewer’s on the Bay you can take a tour of the brewery itself and choose from 40 different beers on tap; you can also try their new line of spirits. At Rogue Ales Public House, sit on the patio, play some pool, and choose from 35 taps. Above the Public House, at Bed ‘n Beer, stay in a room with full amenities and a view of the Bayfront. At the House of Spirits, dip into rums, gins, vodkas, whiskies, and beer cocktails.

While you’re in the area, check out aquarium in Newport, or the Yaquina Head Outstanding Natural Area, with its lighthouse, whale-watching, and gorgeous Cobble Beach. But be careful—the lighthouse is rumored to be haunted! 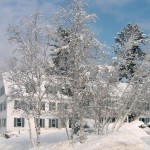 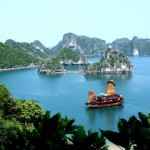