Creative Ways to Spend Time at Airports During Long Layovers

Spending time in airports is a fact of life for the modern traveler especially during busy holiday seasons. Thanks to the time it takes to pass through increased security measures and the natural inefficiency of airline travel, most people wisely arrive at airports a minimum of two yours before the scheduled departure time of their flight.

But now you don’t have to consider these to be wasted hours. You actually can put the time you spend at airports to work for you by using these six easy ways to make the most of your airport downtime.

If there’s one thing that is consistent for just about every airport, it’s that they are big. Most airports cover a few square miles of land. That’s because they need to have long runways for the big jets to land on.

Turn the size of the airport you are stuck at to your advantage by making a point of walking your wait time away. It’s possible to get a vigorous workout while you wait for your flight to board simply by walking the length of the terminals a few times.

If you are going to be stuck in the airport for an extended period of time, you could even step out of the secured area and go outside, where you can walk the perimeter of the airport or at least explore the streets and avenues around the airport itself.

Some airports even have gyms or fitness centers where travelers can spend their time between flights walking on treadmills, riding an exercise bike, or lifting weights. Look online to see what type of facilities are available at the airport you will be spending your layover.

Airports can be tricky when it comes to free WiFi, however, so scope out a spot where you can stream for free rather than having to chew up your minutes. Here’s a hint: Most big coffee chains, including Starbucks, offer free WiFi at all their locations. So if you are stuck in an airport with a Starbucks, buy yourself a latte, claim a chair and settle in to watch a movie or binge watch a TV show you’ve been meaning to catch up on.

Airports attract one of the most diverse groups of people you will find gathered in one place at any one time. If you are the sort of person who can entertain themselves observing human behavior, there’s no better petri dish than an airport terminal.

Park yourself on a bench and watch the parade of humanity as it passes you by. You will see families, groups of students, single business people, strangers from exotic places, petty criminals on the make, and all sorts of other interesting people just by paying attention.

If you are in a strange city, you usually don’t need to travel out of the airport to taste the best foods the region has to offer. Most airports today have miniature versions of some of their most popular restaurants right there in the airport terminal.

So if you’ve always wanted to try a Philly Cheese Steak, you can find many different examples at the Philadelphia airport. Or try a deep dish pizza at Chicago’s O’Hare International, or a plate of poutine in the Pittsburgh airport.

Make a point of never eating at a national chain restaurant in an airport terminal. You can eat that type of food anytime. But you may never get the opportunity to try the local delicacy, so make the most of your airport adventure by trying something new.

If you are stuck at an airport, odds are you aren’t the only one. In fact, most airports are big collections of people who are trapped within a confined space. That makes them the perfect places to meet new people and try to make a new friend.

Strike up a conversation with somebody who looks interesting by asking if they are stuck between flights the same way that you are. Or break the ice by asking where they are traveling.

Usually this is all it takes to get the conversation rolling. Spending time talking with somebody else who shares the same problem you do is a great way to make the time go faster.

One of the best ways to make time pass quickly is simply to go to sleep. Find a comfortable chair or see if the airport offers a hotel or lounge where you can catch a few hours shuteye as you wait for your flight to board.

Some of the larger airports have begun to install sleeping pods.  For a reasonable fee you can rent a small but comfortable sleeping space by the hours.

It’s common place now to find massage outlets at airports where you can let someone massage that stress right out of you.  Or it’s a great time of to stop for a manicure or pedicure.  For a bit of quiet space with comfortable seating, visit an airline lounge.  Most airline affiliated lounges allow entrance for a $50 fee which may be well worth it if you’re spending several hours at the airport between flights. 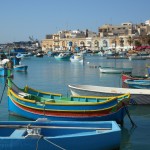 How to Tour The Best of Malta In One Day