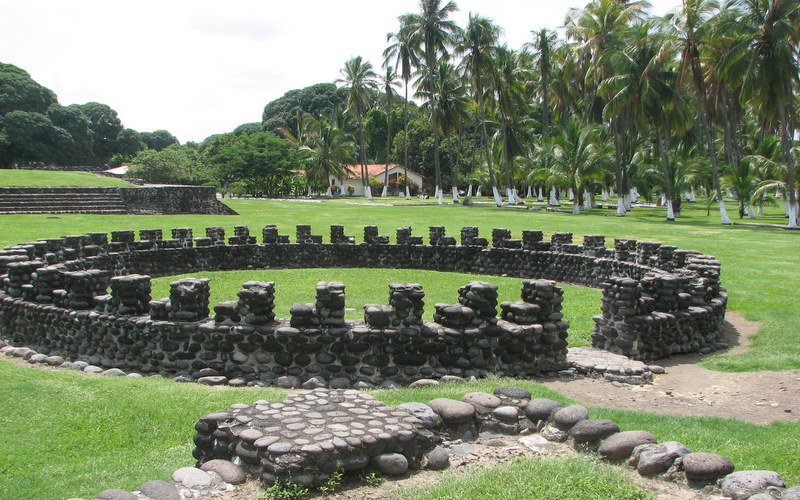 I first discovered Cempoala (sometimes spelled Zempoala) in 1971, only 452 years after Cortés dropped in during 1519. Modern day villagers were delighted to see an outsider. I was virtually passed from family to family to share meals of shrimp soup under palm, mango and banana trees. I questioned: was I touring Mexico or being a unique object on display for the locals?

Templo Mayor with the edifice Las Chimencas to the right.

Located off Federal Highway 180, thirty miles north of Veracruz, the peaceful town is where the first Christian cross was raised on the mainland of the New World. Cempoala and its pyramid complex has long been one of my favorite Mexican villages. The name comes from a Nahua word meaning “place of twenty,” probably referring to either twenty towns making up part of a larger domain, or a market occurring every twenty days. The archaeological site is large and rarely crowded, allowing tourists to explore at their leisure. A quick glance at the site’s history reinforces how important the little village was to the conquest of the New World.

Too many Americans driving to Yucatan cheat themselves out of a special experience by speeding past Cempoala. Pulling off and walking the archaeological site is not only worthwhile, but the lucky tourist will also meet some villagers. That’s when one truly experiences Mexico. On my first stop, the elderly village matron had died. Despite speaking no Spanish, my new friends insisted I accompany them to the wake. During the early evening, I sat with the men on long wooden benches outside the home. Adolescent boys, some wearing shoes for the first time, tended us, delivering cigarettes, strong drink and coffee while we sat and talked. I don’t know if I’ve ever experienced more of Mexico than during those three hours.

Templo Mayor with altar in front.

Archaeologists estimate the pyramids were begun about 1200 A.D., but there are hints the site could be older. On a lower level of construction, a clay figure was unearthed reminiscent of the Chac Mool (a reclining/seated statue, head at a right angle and having a table-like stomach area), a possible link to the Mayan culture. Early inhabitants lived by agriculture, gathering, hunting and fishing in the tributaries of the nearby Actopan River. The fertile area easily supported a settled population.

Cempoala claims the only pyramids discovered in Mexico where the builders crushed seashells and mixed the fragments with mortar in construction. These pyramids are built of roundish stones cemented together. The stones were passed fire-brigade fashion from the river. In time, the Aztecs subjugated Cempoala, then forced them to send tribute, including humans for sacrifice, to the Aztec capitol Tenochtitlán (now Mexico City).

After Cortés landed, the Cempoalans allied with the Spanish and aided in the fall of the Aztecs. In 1520, within an eighteen-acre walled section of the pyramid complex the Spanish fought a major battle among themselves. The result was the nearly total abandonment of the city of 30,000 Totonac Indians. In 1660, the remaining Indians were completely removed from the area, yet Native Americans clearly make up much of the present population and native languages survive beside Spanish. Today, Cempoala retains the stereotypical image of the sleepy Mexican village.

Throughout the 1970s and 80s I visited Cempoala every few years. The village always managed to introduce me to some new aspect of Mexican life. In the 1990s I was in for sad news. I had become friends with a Mexican-American World War II veteran, who had retired to Cempoala, and his compadre, the director of the pyramid site. Every three or four years, I spent several days visiting these old friends. At the entrance, I didn’t see either man. When I asked for Don Quicho, they looked puzzled. I then said, “el guia” or “the guide.” The new caretakers realized I was their old American friend. I was no longer just a tourist. I became the new director’s responsibility.

Sadly, both men had passed away since our last reunion. News of their deaths had a strange effect. I’d visited enough we’d become true friends. Men of another nation who’d aged and died during my life. Don Quicho, a local name, spoke English, Spanish and Nahuatl when we met, but lost the use of English over the years.

The new director took me to several homes to speak with mutual friends I knew from various fiestas and other visits. Kids who had marveled at my motorcycle in 1971 were now grown with families. My first visit had been a noteworthy event in the life of the village. There had been no television and little contact with the outside world. My bike and white skin had broken the monotony.

Even during this sad visit, the village had a surprise for me. Los Voladores de Papantla were to perform that afternoon. I’d wanted to see their pre-Hispanic ritual for years. Their real home is further north at the ruins of El Tajin. I’d always missed them when I’d visited that area. I eagerly waited for three hours until the Totonac Indian troupe put on their ancient performance. For over two hours, the Indians went through various rituals and erected the pole they flew from that drew little attention. A few village women appeared, herding small groups of young children. As one o’ clock approached, the villagers told the few tourists to wait and see the unadvertised performance.

Five Indians, dressed in predominately red and white costumes, spent thirty minutes climbing the hundred foot-tall pole. Four of them fastened themselves to ropes and leapt from the top. The fifth Indian played his flute and drum while his partner’s ropes slowly unwound twirling them through the air, slowly lowering them to the ground.

It was a performance less exciting than the rides at most county fairs and too tame to compete with an action movie. However, the fifteen to twenty tourists and thirty-plus villagers watching from the shade of a palm grove appreciated the bravery and history. Their hearty round of applause echoed off the surrounding pyramid walls, saluting the Indians and their ancient tradition.

A few years ago I again stopped at Cempoala. The government had put in a large overpass across the road to Cempoala off Highway180 making it less likely a tourist will pull off and travel the few miles to visit. The road became bumpy at the town limits and I realized Cempoala was again becoming an isolated, sleepy village. Except for two Mexican ladies, I had the ruins to myself for walking, exploration and reflection.

When the original structures were rebuilt most had been destroyed down to their sixth step. The reconstruction has always looked great to me. I thought about the millions of football-sized river stones used for the various edifices. It was hard to imagine the long line of Indians passing stones from the river to the site.

Does this museum piece represent the typical fellow Cortés met in 1519?

I finished my afternoon in the park-like archeological setting taking one long, last look at the Great Temple. Half of it is built solidly as is the style of the city. The other half is a Mayan type, narrow-stepped pyramid that contains hidden passages and burials. The museum director said there was still nothing yet published on the burials. That was okay with me. I had another—or perhaps the same old–good reason to visit Cempoala on a future trip. Right now it was time to hunt down a camarón (shrimp) cocktail at a local restaurant if an old friend wasn’t available with a table surrounded by palm, mango and banana trees.

This is a far more than simply a motorcycle book. It is an informative guide presented in story form by the author of over 600 magazine articles. If you’ve thought of traveling Mexico but are a bit concerned, you’ll want this book. Kaliher exposes many misconceptions, but doesn’t avoid the negatives. Best of all, if you survive this literary motorcycle ride—as Kaliher pits man and machine against some rough geography and conditions–you’ll be less apprehensive about visiting our Southern neighbor. ****************************************
Image Source:  William Kaliher