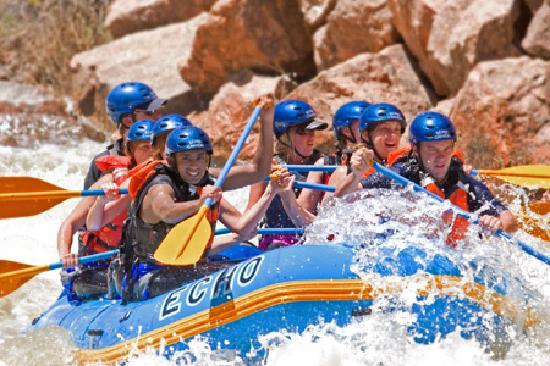 Rafting Royal Gorge in Colorado, A Day To Remember For A Lifetime

Have you ever wondered what it would feel like to raft underneath one of the highest suspension bridges in the world? Have you and your friends been planning on taking a vacation and want something more exciting than just laying on the same old beach? Well, in terms of raw entertainment, rafting the Arkansas River in Colorado through Royal Gorge is the best distraction from the typical daily grind you and your friends may every experience.

Looking to the west, the view to the Royal Gorge Bridge is absolutely sensational and jaw-dropping! That’s just the view from the top – wait till you are paddling underneath it in some class lll to V rapids. You’ll witness a view from below that will be forever imprinted into your memory.

With 1,000 foot canyon walls towering over you, the Arkansas River is known as one of the most prestigious and earth-dividing rivers throughout the world. Speaking from someone that has made this Royal Gorge rafting trip several times over, I can tell you that it still gives me goosebumps every time I raft through these tall canyon walls. In some ways, it almost feels like you’re rafting through an open vein in the Earth’s surface that’s pumping water through the canyon’s muscles and ligaments. Ok, I know that was a bit on the analogically theatrical side of comparisons, but using your imagination will help you grasp the vitality of this river.

A History of the Arkansas River

This is the sixth longest river in the United States ending in Napoleon, Arkansas where it converges with the Mississippi River. Its headwaters begin in the Rocky Mountains at Leadville, the highest-elevated incorporated city in the USA. After plummeting 4,600 feet in 120 miles through the slender valley of the Rockies, this falling river runs through Granite, Brown’s Canyon and eventually the Royal Gorge. It’s not until the river finally reaches Canon City, southwest of Colorado Springs, that it starts to widen and level-out significantly. It is the 45th longest river in the entire world, descending and winding its way across Colorado, Kansas, Oklahoma and finally Arkansas. The water is precious not just to whitewater enthusiasts, but also to the many irrigating systems and municipalities who rely on the Arkansas River for their day to day water supply.

Royal Gorge rafting ranks in the top ten rafting trips nationally. Its class III to V rapids stir up the turbulence that most thrill-seekers are dying to get a hold of. Bouncing alongside your fellow paddlers while taking on large waves and hydraulics is nothing short of a team effort. Knowing how to swim is must-have knowledge in this river and is required by most rafting outfitters. Being at least 14 to 18 years of age is typically mandated by most Royal Gorge rafting outfitters as well. Expert guides love showing off their skills while blasting through the whitewater with “first-timers” on this roller-coaster of a Royal Gorge rafting adventure.

3 rapids you’ll pass through are: Sunshine Falls, Sledgehammer, and Boat Eater. There are a number of other exciting rapids that will provide plenty of challenge and adventure as well.

A History of the Royal Gorge Bridge

Construction of the Royal Gorge Bridge was started and completed in 1929, in under 6 months! It held the title of the  highest bridge in the world until 2001, when the Liuguanghe Bridge was built in China. With a span over the canyon of 938 feet, this bridge is a wondrous view from the river below. From towers that reach a height of 150 feet tall, this bridge’s architecture still remains structurally advanced and impressive – even by today’s standards.

The Experience of a Royal Gorge River Rafting Trip

For those looking to take this Royal Gorge rafting adventure, you’ll begin by getting fully equipped with a personal flotation device or PFD (a.k.a. life jacket) and helmet. Wetsuits, splash jackets, and river shoes are available for a small rental fee if the weather and water conditions are cool. You’ll receive recommendations about what wetsuit gear you might need when you check in for your raftngi trip, but in general, if you raft in May or June you’ll probably want to rent a wetsuit. If you raft in July or later, wetsuit gear may not be necessary. Once geared up, friendly and funny guides will direct you to the bus and then they will make sure you are fully equipped before boarding the rafting shuttle. Once everyone is aboard, the doors close and the trip to the river entry-point begins, which is about 5 miles away. During the 5 mile ride, the “head guide” will give everyone on the bus safety instructions, step-by-step, until he or she has covered the most common on-water scenarios and how to deal with those situations. For most first time rafters, this is scariest part of the trip when we detail what to do if you fall from the raft, but realize the safety instructions are ‘what if’ scenarios rather than ‘when it happens’ – falling out of the raft is not a common occurrence.

Arriving at the public entry “put-in” spot (called Parkdale) with multiple buses can be overwhelming at first. However, once all of the guides exit the bus and take the rafts and paddles off of the trailers that are attached to the back of the buses, superior organization becomes evident – these guides have done this before, most of them a hundred times or more. After everyone is assigned to their boats and guides, everyone is put through a paddling exercise that reassures first-time rafters that they are not alone.

Shoving off into the unknown, yet charted-river waters of the Arkansas River, can be a bit daunting to some at first. Once a guide has told everyone that people may fall off the boat, the feelings of uneasiness and excitement have officially set in for first-timers. Then, most guides will reassure everyone that if they follow their commands, such as “right-one” or “left-two”, the chance of falling out is close to %1. It’s this small scare that actually makes first-time rafters wake up and become more alert, which benefits the entire crew, especially when directions are given under intense class-IV rapids.

After shoving off and floating down the Arkansas River just a hundred yards, the rapids themselves are only class II. The guide will start to give the crew practice exercises and practice commands. As mentioned before, “right-one” means the people on the right side of the raft, paddle once and forward. “Left back two” means the rafters on the left side need to paddle in reverse twice.

After the class II rapids of this Royal Gorge rafting experience, everyone will pass under highway 50, which is the official entrance to the “Gorge.” The walls start to climb higher and higher and we will enter what I call “a wilderness setting.” Once we pass Highway 50, you’re going through the Gorge, like it or not!

Sunshine Falls is the first class IV rapid – a class V rapid at the highest of water flows – and also where the pace of the trip really picks up. Most of the gradient in the Royal Gorge (average drop of about 65 feet per mile) is concentrated in the middle portion of the Gorge. Gradient equals fun if you’re a whitewater enthusiast, so chances are you’ll be grinning ear to ear for the duration of this section!

After Sledgehammer Rapid, another solid class IV-V rapid, we float into the Narrows, a class IV rapid which is the tightest section of the Gorge with the start of the tallest gorge walls. Everyone will pass under the Hanging Bridge – a railroad bridge constructed in the late 1870’s, which was an engineering marvel in its time and quite impressive, even by today’s standards.

Immediately after that is Wall Slammer Rapid, yet another class IV, located directly beneath the Royal Gorge Bridge. Boat Eater is the last class IV rapid in the Gorge, and once you pass through Exit Rapid and Pipeline, your raft begins the exit out of the Gorge and back toward civilization. Pink House is the take-out, located on the far west side of Canon City. The whitewater fun may be over, but the memories you just created are sure to endure long after your return to the rafting office.

A Royal Gorge Rafting trip, which is typically taken as a half-day trip, will take about 2 hours on-river and 3 hours overall, which includes the shuttle bus rides.  This action packed half-day adventure is one you will be sure to remember for years to come.

About The Author:  Ben Sack is the General Manager of Echo Canyon River Expeditions, Colorado’s largest white water rafting outfitter. He’s also a raft guide, photographer and a father of two boys. He writes to inspire the adventurer in all of us to get out and explore our rivers. (Google+, Facebook, Twitter, Linkedin) 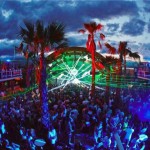 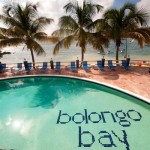