California has always been known for promoting healthy eating habits and has helped spread the popularity of granola, sprouts and avocado to the rest of the country.  Now the city of Santa Barbara is taking it all one step further with the introduction of GuiltFreeSB, an initiative to make Santa Barbara the most diabetes-friendly destination in the United States.

Stop in at the Los Arroyos Mexican restaurant where owner, Tony Arroyo, says “It’s all about portion control, minimizing processed foods, and integrating healthy cars with proteins and vegetables”.  Paradise Cafe offers GiltFree grilled chicken salad or grilled fish tacos that omits the rice.  Armada Wine & Beer helps out by providing a list of calories and carbs for popular wines – who knew Prosecco was such a smart choice?!

Click over the GuiltFreeSB to find sample menus, a great walking tour of popular sites, and resources for vacationers traveling with diabetes.  It’s the hope of Dr. Kerr of the Sansum Diabetes Center that the GuiltFree trend for healthy menu choices will spread to other cities and there will eventually be many cities who make it easy for diabetics to visit their city and stay health on vacation.  With an estimated 30 million people in the United States who are affected by diabetes, this is a trend that’s long overdue. 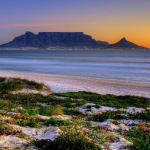