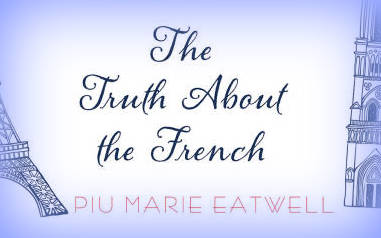 Entertaining New Book Reveals The Truth About Living in France

e?  Ahhh, I can imagine it all now; croissants at daybreak,  long walks through lavender fields, stopping for a picnic of wine, bread and cheese…   But I’m also imagining dealing with the infamous French stand-offish  attitude, poor plumbing, and trying to dress with the chic ease of French women.  Need I worry about the myths and rumors about quirky French lifestyles or is it all just hooey?  Thankfully there is a fantastic new book that reveals the truth about life in France with all its pleasures and idiosyncrasies.

They Eat Horses Don’t They?… The Truth About the French, is a completely entertaining book that looks at 45 myths about the French.  Are the French really uncommonly rude, do they obsess about sex, do women shave, do they eat more cheese than any other country in the world?  These questions and more are tackled with diligent research to prove whether they are true or false.

Author Piu Marie Eatwell has lived in France for many years and brings a wonderful sense of humor to her subject.  Her depth of research surprised me.  Not only does Eatwell address popular myths, but tells the reader the history about how it began, what changes happened over time, and what the status is today.  Photos, statistics and fascinating anecdotes bring the myth into clear focus and examine whether it is truth or a long gone myth.  The reader will chuckle often and have many ‘I never realized that’ moments.  Right from the beginning as Eatwell explained how it came to be that the French adopted wearing berets.  It seems the beret was the cap favored by peasants and became the choice of the counter-culture set making a statement against the aristocratic chic attire.  Little did they realize the beret would soon be adopted by those chic couture designers as well.

Anyone who loves visiting France, is thinking about a trip to Paris, or is planing a longer immersion into French life, will find this book a genuine delight.