Top Festivals in the Philippines for 2015

Top 10 Philippine Festivals to Anticipate in 2015

It’s more fun in the Philippines. This saying is not only the government’s official tourism slogan, but also the truth; the many festivals all around the country are proof of this. These celebrations – colorful and lively displays, parades and performers, and a great amount of food – are mostly based on Philippine history, cultural traditions, and feasts of the Catholic faith. Therefore, they are deeply rooted in the nation’s identity and aren’t just empty merrymaking. If you want to partake in the all-Filipino fun but don’t have a clue when and where they happen, take a gander at the list below. Who knows? Maybe you’d fancy visiting one, or two, or all of them.

Centuries before the Americans and the Japanese fought on the Island of Leyte, the island had its own defenders. Known as the Pintados, they are brave tattooed warriors that are as fierce in battle as they are intricate in their art. To honor these brave souls, the first Pintados festival is held every 29th of June. If you wish to see these brave men and women of eons past storm the streets in this day and age, then Tacloban is the place to be.

You owe it to bees for the honey you put in a wide variety of food and drinks. There are only a few things in this world that are sweeter than this liquid gold, and one of them is the Buyogan Festival. Held in Abuyog, Leyte every August 29 to coincide with St. Francis Feast, dancers imitate not only the bees’ looks but also their buzzing movement, making it an awesome spectacle to behold.

If bees buzz down south, then buds blossom up north in the Panagbenga with their Festival held in the city of pines. The name of the celebration originates from a Malayo-Polynesian word that means “season of blooming”, an appropriate moniker to honor the beautiful flowers in the region. In Baguio’s own version of California’s Rose Parade, other than the colorful dancers, a wide plethora of flora – one of the city’s crown jewels – are showcased.

From the mountains, fly down to Davao for the Kadayawan Festival. Held every third week of August, it is named after the word “madayaw”, which means good, superior, or beautiful. A celebration of nature’s gifts and the people’s cultural advancement, the festival’s highlights include floral floats, street dance competitions, and exhibits that display the island’s tourism-related items and hotspots.

Masskara Festival is held every third week of October as a defiant response to the region’s economic crisis during the 80’s, the citizens of the City of Smiles dance while their faces are concealed by beautifully crafted masks. Despite its grim origin, Bacolod’s take on Mardi Gras has now become one of the most renowned festivals in the country, turning sadness into celebration.

Other than the world-famous pristine beaches of Boracay, the island of Aklan is also known for the Ati-Atihan festival. On the third week of January, men and women emulate the looks and the dances of the aborigines who first occupied the island – thus the name Ati-Atihan, which means to be just like aetas.

Behind this festival’s long name is a beautiful meaning – Dances of the Lights. On the fifth day of the first month of the year, people flock the town of La Castellana, Negros Occidental to partake in this celebration that honors the birth of Jesus Christ, where mesmerizing displays of lights and dances await to be captured by affordable Android phones from the Philippines.

If restaurants have sample platters that give you a taste of the many dishes on the menu, then fiestas in Cebu have this. In every first week of August, representatives of towns and cities across the province converge in a host town to join a contest where the municipality with the best preview of their fiesta wins. Its tagline, Festival of Festivals, is a truly befitting one.

If you go to Iloilo City on the fourth week of January, you will hear the thundering of the drums and loud shouts of “Hala Bira!” from the people dressed in colorful tribal clothes. But mind you, Dinagyang isn’t just one of the grandest festivalsin the country; it’s also, and more importantly, a festivity that pays homage to the Santo Nino and the Christianization of the island.

A  festival that lasts only for a day is way too short. So, how about nine days? That is the Sinulog Festival for you. It’s a one-week-two-day extravaganza that draws millions of people to the Queen City of the South, so you better be ready to feast until you drop. But of course, this mega-celebration isn’t just a spectacle of great length and magnitude – it’s also the country’s biggest tribute to the Holy Child Jesus.

Reading all that, you must be pumped! And perfect timing too; next year’s just around the corner, so you can start feasting when 2015 starts. 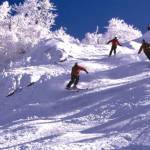