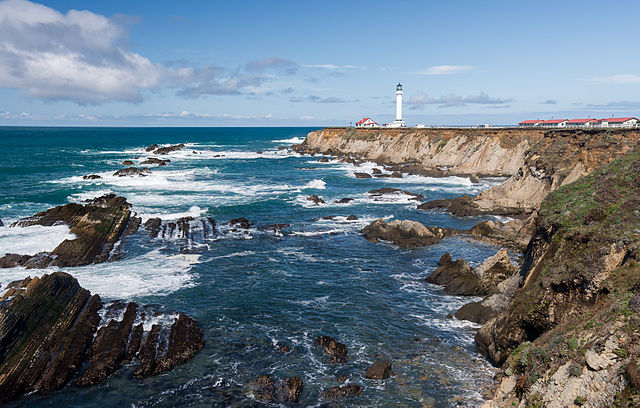 Mention scenic lighthouses and most folks will picture the craggy coast of New England dotted with historic Atlantic coast lighthouses lighting the way for fishing boats and merchant ships plying their trade to Europe and beyond.  But we would be remiss not to appreciate the majestic Pacific coast lighthouses guiding ships in from the far east or after rounding Cape Horn to reach California in the great gold rush era.  Like the Spanish missions, lighthouses were built in strategic locals all along California’s coast.

Come along with us as we map out a dramatic 950 mile road trip (perfect for an RV vacation) traveling north to south to explore 7 distinct areas and 15 lighthouses along the Pacific coast of California.

Battery Point Lighthouse – constructed in 1856, this Cape Cod style light is one of the earliest lights in California and has stood resolute through quakes and even the 1964 tsunami that destroyed most of the city.  Believed to be haunted, this lighthouse attracts lots of visitors.

#2 Mendocino Coast (approx 4.5 hour drive from Crescent City)
Point Arena Lighthouse:  Originally constructed in 1870, this lighthouse was destroyed during the 1906 San Francisco earthquake.  The replacement 115-foot lighthouse became the very first lighthouse in the United States to be steel-reinforced.  There is also a small museum and gift shop at the property.

Point Cabrillo Lighthouse:  Built after the 1906 earthquake, this light was constructed to warn lumber carrying ships to steer clear of the coastal shoals.  While not overly tall, standing at just 32 feet, the was built on a tall, dramatic headlands raising 81 feet above sea level.

Perhaps the most famous island park location on the west coast, the Alcatraz Ligthouse was the first lighthouse to be put into operation on the Pacific Coast.  Originally built in 1852, it was replaced in 1909 after being damaged by the 1906 earthquake and in at the same time that the Alcatraz prison was constructed.  The light can be visited by taking the ferry to Alcatraz island.

Located just north of the Golden Gate Bridge, the Point Bonita Lighthouse was originally built in 1855, but like many suffered considerable damage in the great quake of 1906.  This was the last light to be manned on the California coast.  For many years it was inaccessible because of salt-water erosion if the expansion bridge.  A new bridge was built in 1912, so the lighthouse ban be visited again, including full moon tours during summer months.

Point Montara Lighthouse:  Set between Montara and Moss Beach on U.S. Rt 1, this light is 25 miles south of San Francisco.  This lighthouse began its life as The Mayo Lighthouse in Wellfleet, Massachusetts.  In the early 1900’s it was dismantled and ultimately reconstructed as the Montara Light Station in 1928.  The grounds can be explored, but no formal tours are offered.

Point Reyes Lighthouse:  This light station was built in 1870 at what is often considered the windiest and foggiest location in California.  Several light-keeper families are based here at one time and share housing in two 4-plex family buildings.  This location is often fogged in for a week or more at a time, and it is not unusual to be hit by gale force winds.   But in sunny summer months, the site attracts lots of visitors.

Point Pinos Lighthouse:  This light has been in operation since it was first built in 1855 and is the oldest operational lighthouse on the West Coast.    Like many it was reconstructed after the 1906 earthquake.  Many consider this to be the prettiest of all the California lighthouses.

Take the winding drive up the tall headland rock to the Big Sur Lighthouse, 19 miles south of Carmel.  Constructed in 1889, it is considered to be one of the most haunted lighthouses in the United States.  October brings a host of ghost tours offered as fundraising events.

Piedras Blancas Lighthouse:  This lighthouse is located just over 5 miles from San Simeon and the Hearst Castle.  The once ornate top light was removed after repeated earthquake damage, and the current light is now about 30 feet shorter than the original.  The station has also been utilized by scientists for marine biology research.  Just a mile south of the park is the largest elephant seal rookery on the Pacific coast.

Also known as the San Luis Obispo Lighthouse, this recently restored structure is the only remaining “Prairie Victorian” style lighthouse on the West Coast.  Lighthouse trolly tours are available to the site.

This lighthouse which is listed on the National Registry of Historic Places, dates from 1926 and is located on the Ponto Verdes peninsula, just north of Los Angeles harbor.  It guides thousands of ship into Los Angeles each year and is one of the brightest lights on the California coast.  In fact, it was dimmed during WWII to avoid assisting the enemy.  The lighthouse is open every second Saturday of the month.

Perched on the tip of the Point Loma Peninsula at the entrance to San Diego Bay, the 1855 lighthouse is located within the Cabrillo National Monument.  The lighthouse is now preserved as a museum and no longer operates as a navigational light.  The original light had the highest elevation in the United States at the time, and was often engulfed in thick fog which obscured the light.  Consequently a new Point Loma Light was constructed at a lower elevation at the edge of the peninsula.

Where To Stay – Nearby Campgrounds and Parks Include:  Campland by the Bay, Mission Bay RV Resort