Ronda Spain in the Andalusian Countryside – What an unforgettable way to spend a few days in Spain! While spending three weeks touring the south of Spain, we were encouraged by friends to check out the city of Ronda in the province of Malaga. So we did.

Approaching the town, the landscape gave us no clues as to what was ahead.  The terrain was rather plain and agriculture oriented, until we got to town.  Once in town, history starts to come alive as the narrow cobble stone streets echo the voices from the past.

We had the address of a hotel that we had booked, and found it after circling the center of town several times, following our GPS through the very narrow one-way streets. Courage is needed when you try to find your way in the old town!

But I love, love that GPS on the mobile phone I bought in Spain. That wonder is a necessity!

After we had the car parked, we were free to explore “the new bridge” which was not so new though, as it was from the 18th century.  The gorge, carved by the Guadalevin river, separates the old town dating from Moorish and Medieval times, from the new town dating from the seventeenth and eighteenth century.  It is a breathtaking and a romantic view.  Couples had put padlocks on the bridge to symbolize their eternal love.

On the edge of the gorge you can see cascading flowers and the ancient ruins of previous cultures.  The first people here were the Celts in the 6th century BC. They were followed by the Phoenicians, the Romans and the Visigoths (a German nomadic tribe). Ultimately the Moors who came in the 8th century, had the largest imprint on the town. Many wars have been fought over this mountain-top town, and it was one of the last stands of the Moors against the Spaniards, in the Reconquista war.

As we peeked over the edge we saw people taking the winding walkway across to explore the small river below. The way down is a mixture of stairs and paths that snake back and forth. There were even some waterfalls at the bottom that were audible from the top that added to the ambiance!  After consideration, we opted not venture down.

Restaurants at the town center all looked good, but we asked the hotel receptionist for her recommendation.  She told us to head to the Medieval City Walls which were a bit further away, and to eat where the locals did. We followed her advice and were not disappointed! (It’s always a good idea to find out where the locals eat.)

The restaurant did not open until 8:00 p.m., so we did what locals did, we enjoyed some wine and tapas and did some people watching, then went to eat later. At about 10:00 in the evening we walked back and enjoyed the night lights on the Medieval gate to the city. The churches and church towers were highlighted by lights and and the bridge and the gorge were all flooded with lights.  Beautiful!

We stayed in the old city, so in the morning we started exploring the rest of the city. We walked down to the Arab Baths, preserved from maybe the 1200s and early 1300s, and marveled at how they had aqueducts to control the water. The interior has barrel vaulted ceilings with star shaped lunettes to let in light. There was an informative video to explain how the bathes were operated.

The next visit is a must!

The gardens of Palacio del Rey Moro is a 18th century mansion built on the ruins of a Moorish palace. The views of the gorge there were fantastic, hanging gardens, roses and hydrangeas, as well as a formal garden with flowing water and lily pads. We wandered down the walkways and at the bottom saw the old bridge from the 16th century, that some people say was built over a Roman bridge.  There was a also a secret mine that descends deep into the ground that was used by the Moors as a water source, as well as a defense against invaders.

We had lunch of a tapas platter on Plaza Duquesa de Parecent.   Excellent!  We had a bit of paella, roasted pepper on a tortilla Espagna, bean salad, jamon on toast, sausages on bread and potatoes brava. All good things to try while there.

Our next palace, Palacio Mondragon, dates back to 1314, the time of the Moors and has beautiful gardens overlooking the gorge and beautiful Mudejar ceilings of carved wood. Some of the original doorway arches also show Moorish influence, but much had been modified by the Christians when they arrived.  Today it houses the Archeological museum showing the stages of civilization in the area.

Many of the churches, such as San Sebastien, took the minarets from Muslim times and changed them into bell towers, which would today call the Christians to worship. They played wonderful tunes at noon on the hour.

The last thing we did in town was visit the bullring that houses a school for toreadors and a museum of centuries of bull fighting history.  Ronda is said to be the birthplace of bull fighting, and every September they host a very famous bull fight festival.  Make sure you see this city on your next trip to Spain! 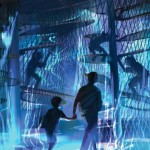 Have A Brainy Summer At The Franklin Institute In Philadelphia