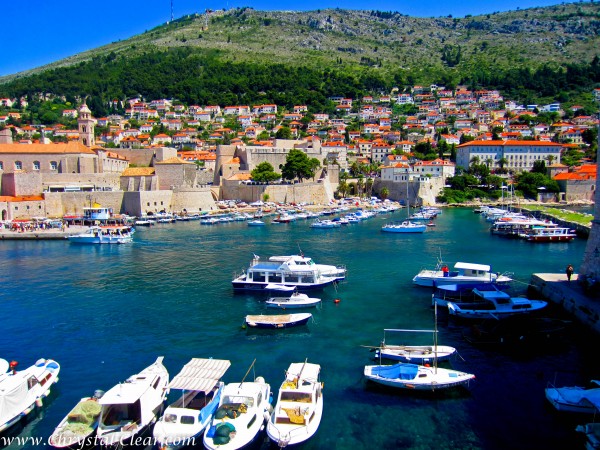 After giving you eight good reasons to visit Croatia in 2014, we are going to take another look at this beautiful hotspot and see why Croatia is known as one of the premium sailing destinations in the world.  Its attractiveness rises from the sheer variety of sailing experiences available to both amateurs and seasoned sailors. Sailing in Croatia provides challenge, adventure, excitement, and the ecstasy of coming into contact with some of the most breathtaking scenery on earth.

Whoever wants to take a sailing trip in Croatia is basically spoilt for choice. The country has a reported 1,267 islands, of which only 67 are inhabited. This means that there are 1,200+ destinations to chart your course to.  However, there are prized spots which have developed a reputation for providing memorable sailing experiences. Here are some of the most popular sailing spots for an unforgettable sailing adventure in Croatia:

Located along the river Krka, Skadrin is renowned for providing a rich variety of all-year sailing experiences. Skradin is situated at the center of the iconic Krka National Park. Its main attractions include a magnificent ria, scenic waterfalls as well as a rich variety of flora and fauna. Sailors can get up-close and personal with the Park’s iconic species from the Dalmatian Barbelgudgeon and Brow Trout to the Perigrine Falcon and Golden Eagle.

Skadrin is perhaps best known for its proximity to ACI Marina Skadrin – one of the most beautiful marinas in Croatia. Situated at the point where River Krka joins the Adriatic, the marina is the sailing nirvana. Its emerald-blue waters are a mixture of sea and fresh water, a combination which makes it attractive for boaters all year round. Skradin also has a rich history stretching back 23 centuries. Therefore, in between taking sailing excursions, visitors can explore its various historical treures.

This idyllic archipelago is the ultimate destination for an adventurous sailing excursion. However, its location in the remote southernmost part of Croatia means that it takes between 2 to 3 hours to get there by boat from the island of Korcula. Those brave enough to take the journey are rewarded with scenic beauty, ancient history, adventure, romance and mystery. Palagruza is surrounded by pristine-blue waters, pebbled beaches and a number of cute uninhabited islands. On the island are lush forests full of colorful birds, butterflies and flowers.

The island contains remains of a 6th Century Roman settlement, medieval Greek fortifications and an elegant lighthouse constructed in 1875. According to folklore, Palagruza is where King Argos – the Homeric hero was buried. However, the ancient king’s remains are yet to be discovered on the island. Visitors to the island enjoy various excitements including sightseeing, scuba diving, snorkeling, trekking, hiking and exploring the island’s historical sites.

Surrounding the iconic medieval city of Dubrovnik, the Dubrovnik Riviera offers the richest variety of sailing experiences in Croatia. Whatever a person’s desires, they are sure to find it here. Those who desire peace and serenity can find it in Slano – an idyllic bay endowed with sandy beaches, lush vegetation and mild climate. Those who want a little more adventure can find it in Mlini – a town sheltered by mountains and embraced by the sea.

Mlini offers numerous excitements including windsurfing, scuba diving, swimming, and mountaineering. Those who want scenic beauty with a touch of romance will find it in Lopud – a picturesque island fondly referred to as the “Isle of Love”. Other attractions in the Dubrovnik Riviera include Zaton Veliki, Molunat, Kormana, the Elafitti Islands, and of course the timeless treasures of Dubrovnik city.

This archipelago composed of fourteen islands has been a major tourist destination since the early 20th Century. Renowned for their scenic beauty, major islands such as Veliki Brijun, Mali Brijun and San Marco are prime tourist resorts. The islands also are also rich in historical sites, ancient architecture and iconic attractions. The Veliki Brijun is renowned for over 200 dinosaur footprints unearthed on the island.

It also contains the remains of a 14th Century BC settlement, two 2nd Century Roman Villas, and 13th Century cathedral. Brijuni is also home to Josip Broz Tito’s summer residence, numerous beach resorts, a sailing regatta and numerous luxurious hotels. The archipelago is also home to the Brijuni National Park. This park is famous for a 1,700 year-old olive tree, and a variety of animals, birds and fish. Some of its iconic attractions include the Ostrich, Mountain Zabra, Nilgai Elephant, shellfish, turtles and dolphins.

Located in an archipelago of 109 islands, Kornati National Park is the perfect destination to enjoy pure unspoiled nature. The Park is surrounded by emerald-green waters, colorful reefs and a rich variety of marine life. The islands are a rich variety of rugged landscapes, barren rocks and lush green isles. Around 76 of the islands are less than an acre in size.

They are however rich in a number of species including butterflies, colorful birds, amphibians, ring snakes and lizards. The largest island – Kornat – has settlements which date back to the Neolithic age. It also has ruins of Roman villas, and the Toreta – a tower built in the 6th Century. Konarti is renowned for its relaxed, serene and peaceful aura. It is the perfect place to relish in the pleasures of nature. It also offers numerous adventures including hiking, scuba diving, fishing and exploring the numerous uninhabited islands.

In a nutshell, those are some of Croatia’s top sailing spots. These spots are the perfect destination for anyone who desires to enjoy a memorable sailing expedition. The best part is that someone doesn’t necessarily have to own a boat in order to enjoy sailing in Croatia. There are a number of charter companies (like this one) which offer rental services for boats, gulets or yachts. Using these services, anyone can enjoy the pleasures of sailing in Croatia.