Guide To The Best Jewish Museums in America

Although barely 3% of America’s total residents are Jewish, the Jewish community has contributed significantly to the American landscape and way of life since the 17th century. Throughout the country, museums both small and large have been established attesting to the unique role that American Jews have played in influencing both their heritage and life in America for all citizens.

Wherever I travel I try to search out Jewish museums. The American Jewish experience varies from region to region. I find that, by observing these differences I am able to appreciate the American Jewish world in all is diversity.

Although today’s Jewish community in Charleston is miniscule, it was once a large and thriving center of Jewish life. The South Carolina Charter was drawn up by John Locke to grant freedom of religion, specifically for “Jews, Heathens and other Dissenters.” That was in 1665 and for almost two centuries Charleston played an important part in American Jewish settlement. Charleston’s historic Kahal Kadosh synagogue hosts the Jewish Museum of Charleston which takes visitors back to the days of the early Jewish settlers. These people were mostly Portuguese families who escaped to Holland from the Portuguese Inquisition. From Holland they emigrated to America. For the first hundred years or so, the synagogue books and affairs of the Jewish community in Charleston were conducted in Portuguese. I never knew that my own history included Sephardic Jewish ancestors until recently but I am now interested in researching my own Sephardic past as I discover new and fascinating aspects of my heritage.

The Kansas City Jewish Museum is a museum of contemporary art which displays exhibitions of local and international artists. I was hesitant to visit the museum because it is billed as a museum “for seniors” but, in fact, I saw people of all ages visiting the museum and enjoying the diverse samples of contemporary art. The museum specializes in innovative art, exhibiting both permanent and temporary exhibits. The Museum without Walls presents displays from local, regional, national, and international art collections which give visitors the opportunity to view cultural and intellectual resources that we wouldn’t be able to see otherwise. Site-specific and traveling exhibitions are on display and the museum offers a wide range of programs and cultural events of both original and thematic content.

The National Museum of Jewish American Heritage offers visitors a chance to explore the length and breadth of American Jewish history. The museum, part of Philadelphia’s Independence Mall, offers a highly engaging view of the history and the traditions of Jews in America. The museum’s core exhibit provides an overview of the American Jewish experience including the diverse backgrounds and modes of religious and cultural expressions of the American Jewish community throughout the years. As visitors walk through the exhibition they will have the chance to consider the difficulties that each wave of Jewish immigrants faced, the choices that the immigrants had to make, their challenges and the ways that American Jewry has been shaped because of those events.

In the mid-1800s, when German Jewish immigration to American began to gain momentum, many new German Jewish immigrants joined the move westward. Two of these immigrants reached Oregon in 1849 and settled in the frontier town of Portland. By 1853 they had been joined by additional Jewish men and a boardinghouse for Jewish bachelors was established. From there the Jewish community continued to expand.

Today Portland’s Jewish community is dynamic and enjoys a reputation as an “alternative” community.  The Jewish Museum of Portland traces Jewish presence in the northwest with a wide range of exhibits that engage visitors and imbue them with an appreciation of the sacrifices that the early Jewish settlers made to come and live in the frontier region. The museum has a large archive with documents, photos and artifacts that tell the story of Jewish immigration and settlement in the region. OId-timers recorded their stories and the audio clips of their memories add to the authenticity of the museum exhibits.

I was pleased to see that, in addition to Portland’s Jewish history, the museum also pays attention to modern Jewish practices and culture which should be a meaningful part of the Jewish experience. There is an extensive display of Judaica which highlights Jewish culture and traditions. Many of these exhibits are not unique to Oregon but their inclusion provides authentic data about Jewish holidays and observances which can be helpful to both Jews and non-Jews who want to explore Judaism more thoroughly. As part of this attention to modern Judaism the museum schedules films, concerts and lectures throughout the year — information about these events is on the website.

Simon Wiesenthal was a famed Nazi hunter. He survived the horrors of the Holocaust and went on to establish the Wiesenthal Center which was dedicated to tracking down Nazi criminals and following their progress through deportations from countries in which they had found refuge through the court system. Wiesenthal established his Museum of Tolerance in Los Angeles to teach the public about the horrible things that can happen when tolerance for “the other” is ignored. The Museum of Tolerance takes visitors through the history of the 20th century as they learn what leads people to hate. The Museum highlights ordinary “heroes” who are able to change the course of history by their selfless acts of kindness and humanity. Due to Wiesenthal’s personal history, the Holocaust section is the most extensive one in the museum, but I found some of the other exhibits to be equally as compelling including the For All the Children which tells the generally ignored history of segregation and discrimination against Latinos in California.

The Milken Archives of Jewish Music highlights American Jewish history via the music and liturgy of the community, The archives, which are based in Los Angeles, explore Jewish Americana from the first Sephardic immigrants who established Spanish and Portuguese synagogues in New York, Rhode Island and Charleston in the 17th century through the German Jewish immigration of the mid-1800s and the great Ashkanazi Eastern European immigration of the late 19th and early 20th centuries.

The Milken Archives has created recordings that trace each of these groups through their prayers and music. A great deal of emphasis is placed on cantorial music which dominates many synagogues today. As I research American Jewish history and my own heritage I found numerous helpful resources and materials available at the Archives. The Archives also offers these resources online. 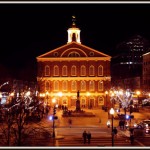 Most Memorable Things To Do ONLY in Boston