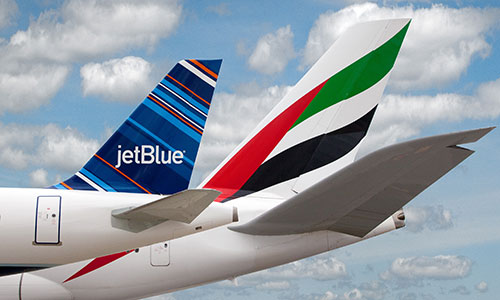 JetBlue Airways and Emirates Airlines Have Formed A Code Share Partnership As New Non-Stop Routes From Boston to Detroit Begin.  As Emirates Airlines begins flying from major US cities nonstop to Dubai, they are partnering with JetBlue Airlines as their United States connector.

I last wrote about Emirates Airlines when they opened their 8th US destination in Boston last month.  Today, Emirates has direct flights to Dubai from New York, Boston, Houston, Dallas, Los Angeles, San Francisco, Washington, and Seattle.  A Chicago route will open in August.   Emirates Airline is known for their exceptional flying experience with attention to detail and outstanding customer service.   Families traveling with young children will be offered priority boarding, bassinets for infants and complimentary strollers at Dubai airport.  While onboard, travelers experience the Ice Digital Widescreen TV with over 1500 premium channels with live real-time news and sports. Especially known for their first class dinning, economy travelers also are treated to a 4-course meal as well.  Flights from New York to Dubai take approximately 12 hours non-stop.

JetBlue has opened new routes from Detroit to Boston to facilitate easy connections to the Emirates flights.  A route once dominated by Northwest Airlines (now Delta) gave travelers little choice, but now there is a big competitor with lower fares and a strong customer service focus.  As a native Detroiter, I was frustrated with only one airline serving Michigan.  The high fares resulted in fewer family trips both to and from Boston, so I’m thrilled JetBlue has entered the region.

JetBlue and Emirates will share more than code, they share rewards programs as well.   The Emirates Skyward program allows you to use points for JetBlue travel as well as the reverse.  http://www.emirates.com/english/skywards/about/partners/airlines/jet-blue.aspx  .  Emirates Airlines was voted 2013 Best Airline of the Year, and JetBlue was voted best low-cost airline of the year, so this is a very dynamic combo.

There are many airline partnerships, but in this alliance it appears that both airlines are focused on the customer – how refreshing! 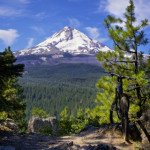 Most Scenic Mountain Bike Trails in the Pacific Northwest 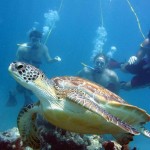 10 Top Family Friendly Things To Do in Turks and Caicos