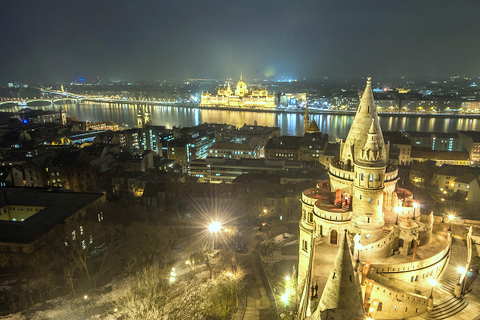 A Look At Budapest Through Your 5 Senses

Discover Budapest through your 5 senses

It was something like a beat, lower than a voice, more like a feeling. I couldn’t ignore it anymore, so I just listened and followed its lead, and before I realized, I was wandering around Budapest, a goldmine of sensory of experiences. And so I did. Here comes my top 5 experiences in the city of lights:

Budapest is full of cafés, and that familiar scent reminding you of sleepy mornings and sunny Sunday afternoons lingers around downtown, and efficiently tempts you into having a cup of your favorite caffeine elixir. But it’s not only about coffee, it’s also about the cafés: each has its own distinctive personality and history, providing an all-around experience.

These are my favorite spots:

– Massolit Café. If you consider yourself a bookworm, you’ll love this place. Massolit’s multifarious library is a mixture of academic books and best sellers, and boasts a respectable amount of hard-to-find-in-Eastern-Europe publications focusing on topics such as Jewish studies, gender studies and progressive politics – all at significantly reduced prices. As for the culinary experience, freshly baked cookies, cakes and American pies take care of that.

– Csendes Vintage Bar.  A flagship of the Budapestian ruin pub concept, Csendes is a bar-café combo with an interior looking like it’s been put together from the craziest stuff found at garage sales. Consequently, Csendes has an artsy, open-minded feel to it, and is the perfect place for philosophizing over coffee (served in a lovely spotted cup).

– Lumen Café. Lumen moonlights as an art gallery, and aims to popularize artistic photography. It’s small, homely, and minimalistic, and the neighborhood in which is located – Palotanegyed, meaning Palace District – is beautiful in a way only Budapest can be.

To experience the real beauty of Budapest, you really need to put your exploring shoes on. There are amazing views that leave you breathless, but there’s also beauty hiding in the tiny streets, there’s history inside the oldest buildings. These are my best two tips to enjoy the sights of the city:

– Budapest is known as the city of lights because of the lights that illuminate both sides of the Danube when the sun goes down. The Margaret Bridge is one of my favorite places to enjoy this view from. Also, the Little Princess is sitting on the Pest bank of the river and offers you company while enjoying the cityscape.

– My second tip is to think beyond touristy paths. Forget those avenues and shopping streets, and get to know the real, somewhat bittersweet Budapest. Pay attention to the buildings and the small treasures around you, especially in the Jewish Quarter, the 7th District.

When it comes to touch, the plan is clear. Hungary is famous for its vast supply of thermal water, and Budapest is the undisputed number one when it comes to thermal baths. Széchenyi Bath is perhaps the most well-known Budapestian thermal complex with its vast outdoor pools, array of saunas, and countless wellness services.  At the other end of the spectrum, there’s Veli Bej, a relatively hidden, recently renovated 400-year-old Turkish bath that only allows 80 people at once.

I’ve already mentioned the 7th District as an off-the-touristy-road destination within the city, and although I’m not a fan of repeating myself, the Jewish Quarter is the place to be if you’re ready to rock. The more or less official party district of Budapest is full of clubs and ruin pubs offering all sorts of concerts. Surrender to the rhythms of Budapest, let the sounds guide you through the night.

Missing out on Szimpla Kert is a no go: this genre-creating venue was Budapest’s very first ruin pub, and its popularity has not taken a hit despite the mushrooming of similar spots in the area. Not the best place for dancing, but it’s extremely popular among foreigners, and you can always bump into great people from all over the globe. Some other good choices are Klub Vittula, a cellar pub-club combo with an alternative vibe, and Corvintetö and Doboz, both being huge, popular all-in-one venues.

Last not least, it’s time to talk about flavors. Hungarian flavors are, well, pretty Hungarian, and by pretty Hungarian I mean easy to distinguish, strong, and unforgettable. Yes, the rumors are true, Hungarians love paprika and cottage cheese, and their love for meat is simply overwhelming.

Talking about cottage cheese, don’t leave the city before trying túró rudi at Cserpes Dairy. Also, the best goulash is served at Paprika Vendéglö – a Hungarian restaurant with a very good reputation. Lángos – a deep fried flat bread served with various toppings, usually sour cream and cheese – is the Hungarian street food par excellence. The best lángos places are located in the 7th District’s Akácfa Street and in the underpass of Óbuda’s Flórian Square. Oh! Don’t forget about the chimney cake! You’ll smell it around the city and it’s worth a try.

Elite Status With Hertz Just Got Easier To Reach