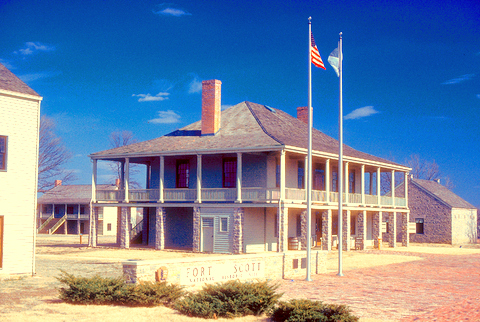 There are numerous well-known sites where travelers can experience a combination of beautiful nature, local history and an atmosphere of Americana. I’m “allergic” to touristy sites but a recent trip out West brought us the opportunity to enjoy all of these elements in a friendly atmosphere of good old welcoming Kansas hospitality.

Friends suggested that we stop off in Fort Scott Kansas, a small town of fewer than 10,000 residents. I had never heard of Fort Scott before this trip but I was glad that we made the effort to spend a day there. Fort Scott may never be known as one of America’s ten most popular travel sites but we appreciated the chance to relax and walk around the cultural and historical sites of the city.

We started our day at the Fort Scott National Historic Site, a fort which was built in 1842 as an outpost for troops who were charged with enforcing the peace between western settlers and the native Osage Indians. 19th century west-bound travelers could load up on provisions at the fort in preparation for their journey over the Santa Fe Trail.

When Kansas became a state the Fort Scott troops were called to intervene between proponents of Kansas as a slave state or a free state.  During the Civil War, Fort Scott served as a Quartermaster Supply Depot as well as a training base. The First Kansas Colored Infantry was trained at Fort Scott — the unit took part in multiple engagements and suffered more casualties than any other Kansas regiment. We were unable to time our visit to coincide with a tour but the posted signs were adequate to allow us to learn about the fort while we wandered about on our own. The National Parks Service, which operates Fort Scott, presents guided tours twice daily with costumed guide during the summer months. Tours leave the entrance area at 11:00a.m. and 1:00p.m. The fort is located on Market Street, south of I54, near the city center. (620) 223-0310

Next on our itinerary was the Fort Scott National Cemetery. The Fort Scott National Cemetery was declared a national Cemetery in 1865 by Abraham Lincoln and is listed in the National Registry of Historic Sites. It is located on Military Road. Early burials included troops that fought the Indians, troops that tried to keep the pre-Civil War peace between pro-slavery and anti-slavery activists and Civil War soldiers. Many of the soldiers buried at the cemetery were black Union soldiers of the First Colored Infantry as well as Confederate troops and Indians. Following Lincoln’s declaration of the cemetery as a National Site, soldiers who had been interned in other graveyards throughout Kansas and Missouri were brought for reburial at the Fort Scott Cemetery. In the cemetery’s northeast corner you can see memorial markers which honor soldiers whose remains have not been identified including WWII flight crews.

When I entered the Gordon Parks museum I was surprised at how many of the photographs I recognized. Parks was a native of Fort Scott. Many people may best remember him as the director of the movie “Shaft” but he was also a talented photographer whose work was featured in many Life magazine photographic essays. The Gordon Parks Museum exhibits many of the pictures that showcase Park’s legend as a humanitarian photojournalist.  Parks’ photographs depict the southern black life that he well knew alongside the racism and poverty of the early and mid-20th century American South. Parks was able to bring the pre-Civil Rights reality of the black American experience to public conscious. The Museum is located in the Mercy Health Center, situated at the southern edge of Fort Scott just off US Highway 69. The museum is open daily from 7:00a.m. – 8:00p.m and entrance is free. 620-223-7036

We took a late picnic lunch out to the Rock Creek Lake Waterfalls park, located about 3 miles west of Fort Scott. To get to the park drive westward out of Fort Scott on 19th Street. The road name changes, first to Kansas Road and then again to 195th Street as it runs along the eastern edge of the Rock Creek Lake. Pull into the park’s lot at the northern end of the lake. We had our lunch first and then walked along the narrow gravel trail which crosses the dam, bringing you to the falls. There are 3 falls — first one and then, a bit further down, two more. The falls have a 5 foot vertical drop and the water then empties into the Marmaton River. When we were there the water was quite high but when the water’s low you can cross the stream below the bottom waterfall.

To end the day we spent some time at the Lowell Milken Center which is located on South Main Street in central Fort Scott. The center was established to pay homage to unsung heroes — people who behaved exceptionally in unique situations. The Center calls these people “unsung heroes” because they had been forgotten by historians until students identified and researched their actions. The first unsung heroes project involved a Polish woman, Irena Sendler, who rescued over 2500 children from the Warsaw ghetto. The school assignment lead to a book, a website and a performance and inspired educator Norman Conrad and Center-director Lowell Milken to develop a  center where similar projects could be promoted. Today the Lowell Milken Center supports students throughout the nation as they undertake serious works of scholarship in identifying and telling the story of an unsung hero. The Milken Center is open daily where you can view all of the submitted projects. You’ll also see featured projects which have received the Center’s annual Discovery Award.  (620) 223-9991

Our trip took place in October but our friends — the ones who had originally suggested that we visit Fort Scott — visited the town in June and were able to attend the annual Fort Scott Good Old Days Festival. The Festival includes a crafts mini-fair, a Dock Dogs competition (dogs jump off a dock into a pool of water while they try to catch a toy in the air.  The dog that jumps the furthest wins), carnival food and drinks, street dances, live entertainment, rides and more.

Plan a Family Vacation To Umbria, The Green Heart of Italy